When an Italian coffee company put their name on a cycling team’s jersey, they had no idea what kind of chain reaction they were about to set off. The bold branding, simple lettering and the intrigue of a foreign-language word branded across continental chests as they cycle furiously on steel bikes across winding alpine roads, was enough to set curious minds racing. What did it mean? Who are Faema? And how long have these jerseys existed? These pivotal questions were all a result of the force that drew people into this inspiring cycling jersey. 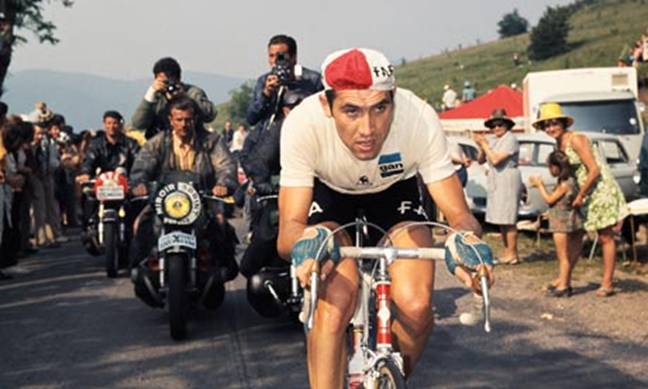 A similar era to the infamous orange and black Molteni jersey, the Faema strip was often worn by stylish cycling superstar Eddy Merckx, instantly making it more desirable. It’s red and white simple design had a few different variations, but fundamentally remained the same: recognisable and bold – even the hats were quite nice, as you can see below.

The recent re-emergence of cycling hats and caps is no doubt fuelled by photographs like this, and so big brands such as Castelli, Le Coq Sportif and Sportful are looking back to their heritage and bringing back caps of their own.

The Start of the Coffee Revolution

What came first, the chicken or the egg? Well there will surely be someone out there who could tell us whether the Faema sponsorship kick-started the coffee trend in cycling culture, or whether it was merely a device that enabled the relationship to be amplified and scaled-out across the continent and to the UK. Whatever the answer, the relationship between cycling and coffee is an interesting one.

We were equally as guilty of paying homage to the styles of yesteryear, as we launched our PBK Heritage range last month, you could say some of the echoes of the Faema jersey influenced the colour-way of our Vernon Jersey.

The Grand Tours – Rules and Regulations for Partners