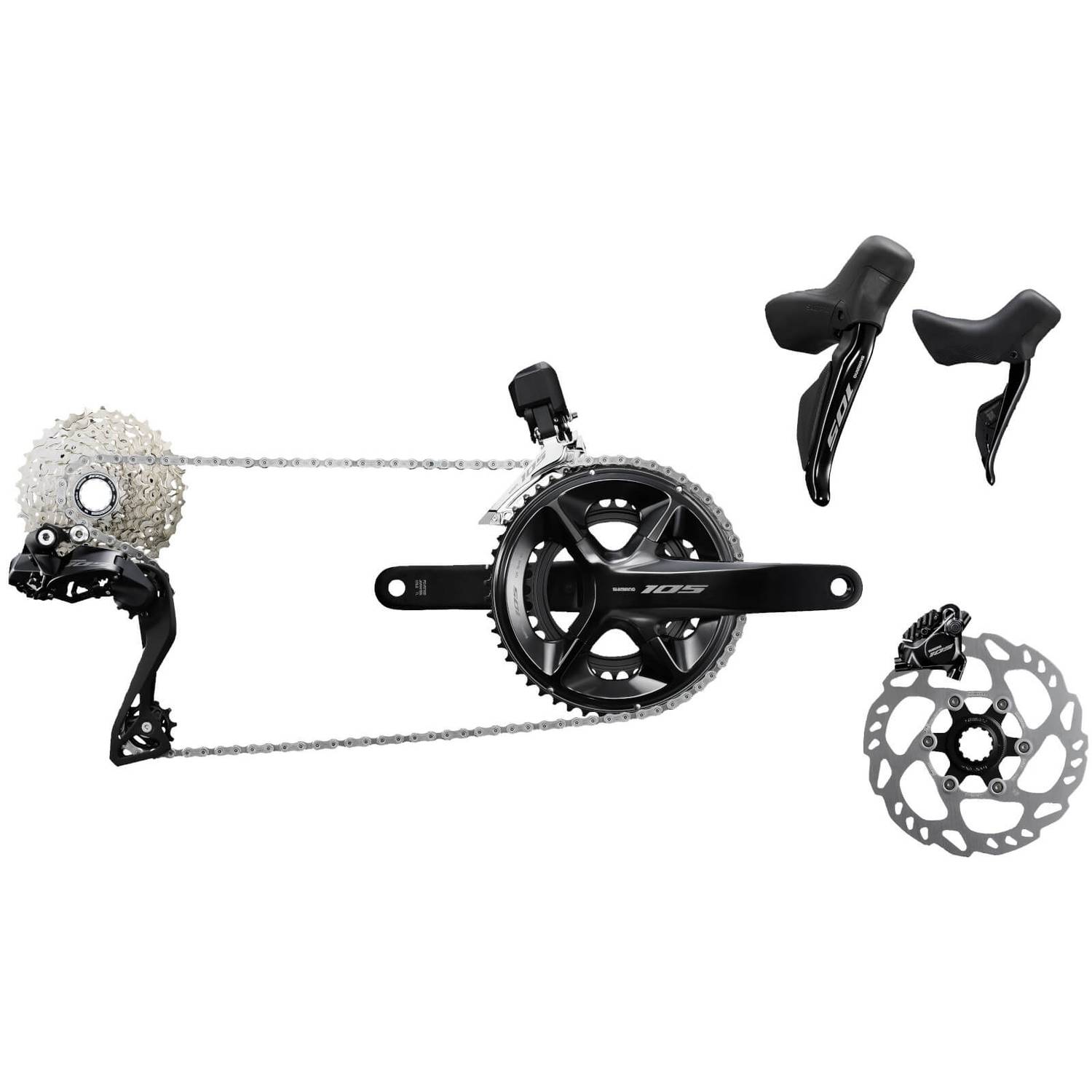 The Shimano 105 R7150 Di2 groupset is perhaps—without exaggeration—the most hotly anticipated groupset of the century. Even in mechanical form, the 105 series is widely regarded as one of the most reliable and affordable performance groupsets, with the introduction of electronic the gap between the brand’s mid-tier range and its top-tier is now closer than ever.

A Battery For The Ages: The introduction of wireless shifting might leave you feeling concerned you’ll be forever charging batteries and living in perpetual fear you’ll be stranded in you biggest gear miles from anywhere. But with 105 Di2, power is supplied via two CR1632 coin cell batteries in the shifters, which should provide over three years of life. With such a range, even the heaviest of users shouldn’t find themselves in a constant state of charging and re-charging batteries.

Semi-wireless Setup: 105 R7150 uses the same semi-wireless, 12-speed shifting setup as the top-tier models. The proprietary semi-wireless system means there is no longer any need from wires to the shifters to the derailleurs. Since there’s no need for wires and cables, the cockpit of a bike set up with 105 Di2 is cleaner and less cluttered than ever.

Shift Into Gear: Of course with the change to electronic gearing, one of the most significant changes to the groupset is in the shifters themselves; the all-new 105 ST-R7170 levers now operate in much the same way as the top-of-the-line shifters. Shifting gear couldn’t be simpler: click a button on the shifter and almost instantly you’ll hear the derailleur whir into life. Drawing on Shimano’s years of experience in electronic shifting, you can expect smooth gear changes at the touch of a button.

Without the need to accommodate levers, wires, or ports, the shape of the R7150’s levers has been brought more in line with the sleeker Ultegra and Dura-Ace shifters. The new, slimmed down, STI levers are also more ergonomically shaped, thanks to the raised hood peak and offer more opportunity to refine the reach.

The Brains Of The Operation: Another significant change to previous mechanical setup is in the front and rear derailleurs. The rear derailleur is an integrated, 12-speed wireless unit, which will comfortably accommodate an 11–36T cassette. Such a wide range of gears is perfect for those big climbing days, without spinning out when the road tips back down or when you’re racing along in fast bunch rides. The rear mech uses Shimano’s Shadow technology is incorporated to reduce the risk of the derailleur hitting the chainstay in rough-riding conditions, and to provide smoother, quieter performance.

The 105 Di2 front derailleur offers the smooth shifting you’d expect from the Japanese component makers. It can be programmed to be manual, or full or semi-synchronised, accommodating a 50T or 52T chainring.

Crank It Up: Shimano continue to deploy their famed Hollowtech II technology in the R7100 crankset, which is now 2x12-speed. This is the same technology they have employed in the 105 range for years, and features also in the company’s premium lines. The result is a sturdy crankset, that is stiff and relatively light.  Incorporated also is Hollowglide technology, which offers more precise and efficient power transfer than ever before. Shimano have been able to reduce the weight of the crankset but maintain stiffness, strength, and performance.

Stopping Performance: The 105 hydraulic disc brakes of the previous iteration were highly capable; for the latest ST-R7170, Shimano have further improved braking performance. The lever-action required for braking is now lighter and smoother, offering a greater area for braking control. For 105 Di2, the clearance for pads has been increased by 10%, reducing braking noise. Overall, rain or shine, you can be assured of high-performance stopping power.

Blog - Shimano 105 Di2 is here - Electronic Shifting for the Masses

Please check the stock availability notice on your item when placing your order. This item is: Preorder now