In the heart of the city where all it is all happening, Santini once again have been working hard to bring us a unique collection that sits superbly between the four official jerseys of the Vuelta Espaná. Santini’s designs support more than 80 years of experience are close to everyone’s hearts, whose beat faster, and grow bigger with every edition of the Vuelta Espaná. Santini’s understanding and close connection between the bike and the clothing mean ‘We share the same values and passion.’ as amateurs and professionals alike. This is clearly displayed in their work and their passion for the sport is passed onto us, the cyclists to enjoy and celebrate for this edition of the Vuelta.

‘As part of the celebrations for the International Tourism Fair in Madrid, Santini Cycling Wear and La Vuelta have presented to us, six new jerseys dedicated to the various stages of La Vuelta 2017.’ Aside from the four official jerseys for the respective classifications. They have produced six special edition jerseys in a collection aimed at cycling enthusiasts eager to wear the rollercoaster emotions of La Vuelta.

The stories of the jerseys.

The KM Cero jersey is dedicated to Puerta del Sol, one of the most famous squares in Madrid’s historic old town. It has a wind rose inlaid into its cobbled surface which marks Kilometre Zero or the starting point for Spain’s radial main road network. This also works as a clever reference to the Kilometre Zero concept for line races. The Santini-designed jersey is a mix of dark and light blue, and features a motif comprising a sequence of zeros in red and yellow, the colours of the Spanish flag. 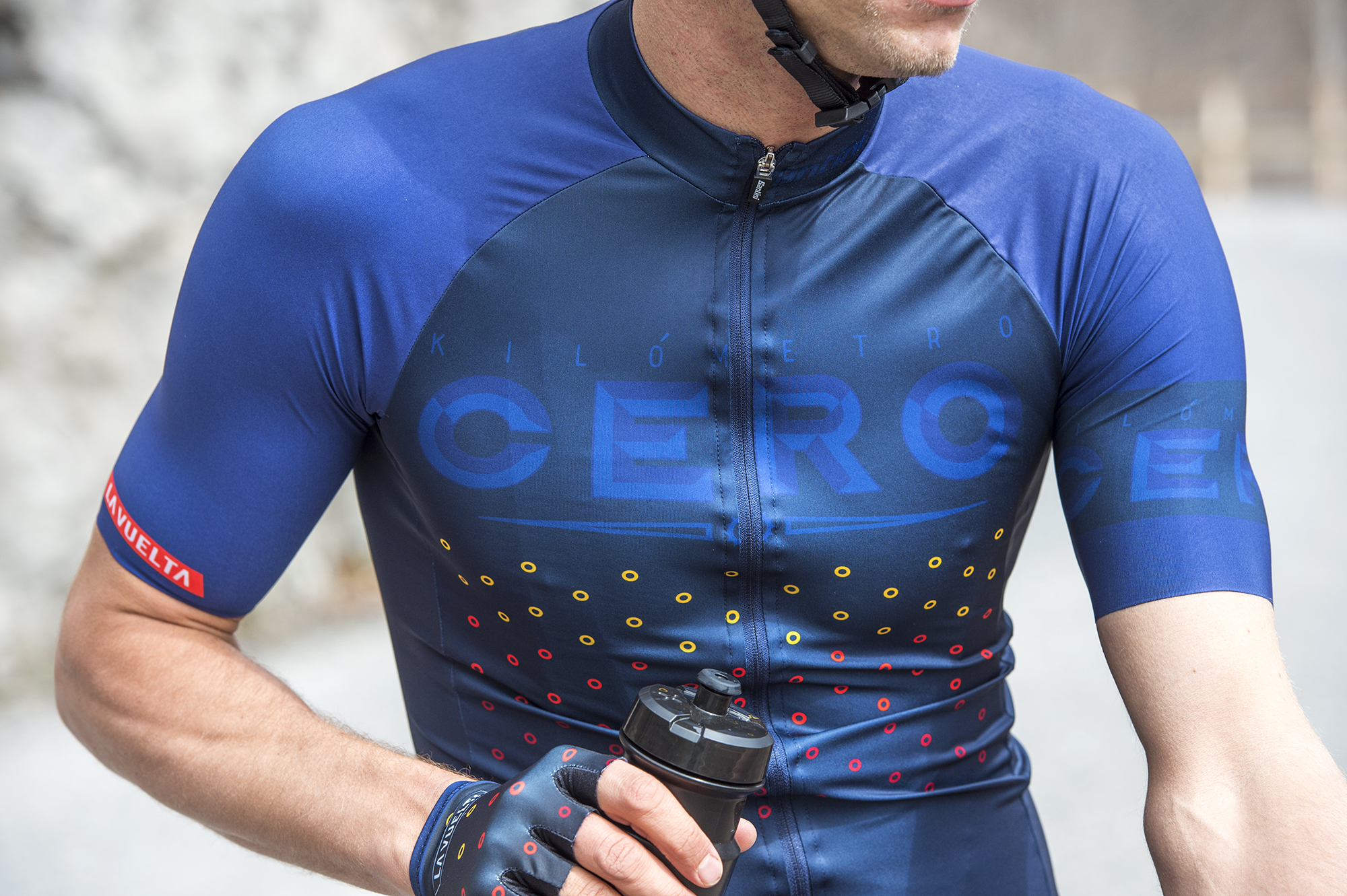 The El Infierno Jersey is dedicated to the Angliru climb, one of the toughest in Europe, which has been reintroduced into one of the stages this year. At its steepest, the Asturian climb’s incline easily exceeds 20%, earning it the nickname of “El Infierno”. The Santini jersey is very fittingly in the hellish colours of red and black with the El Infierno moniker emblazoned on the chest where it melds with Angliru name and a repeated fork motif to underscore just how diabolically gruelling the climb is. 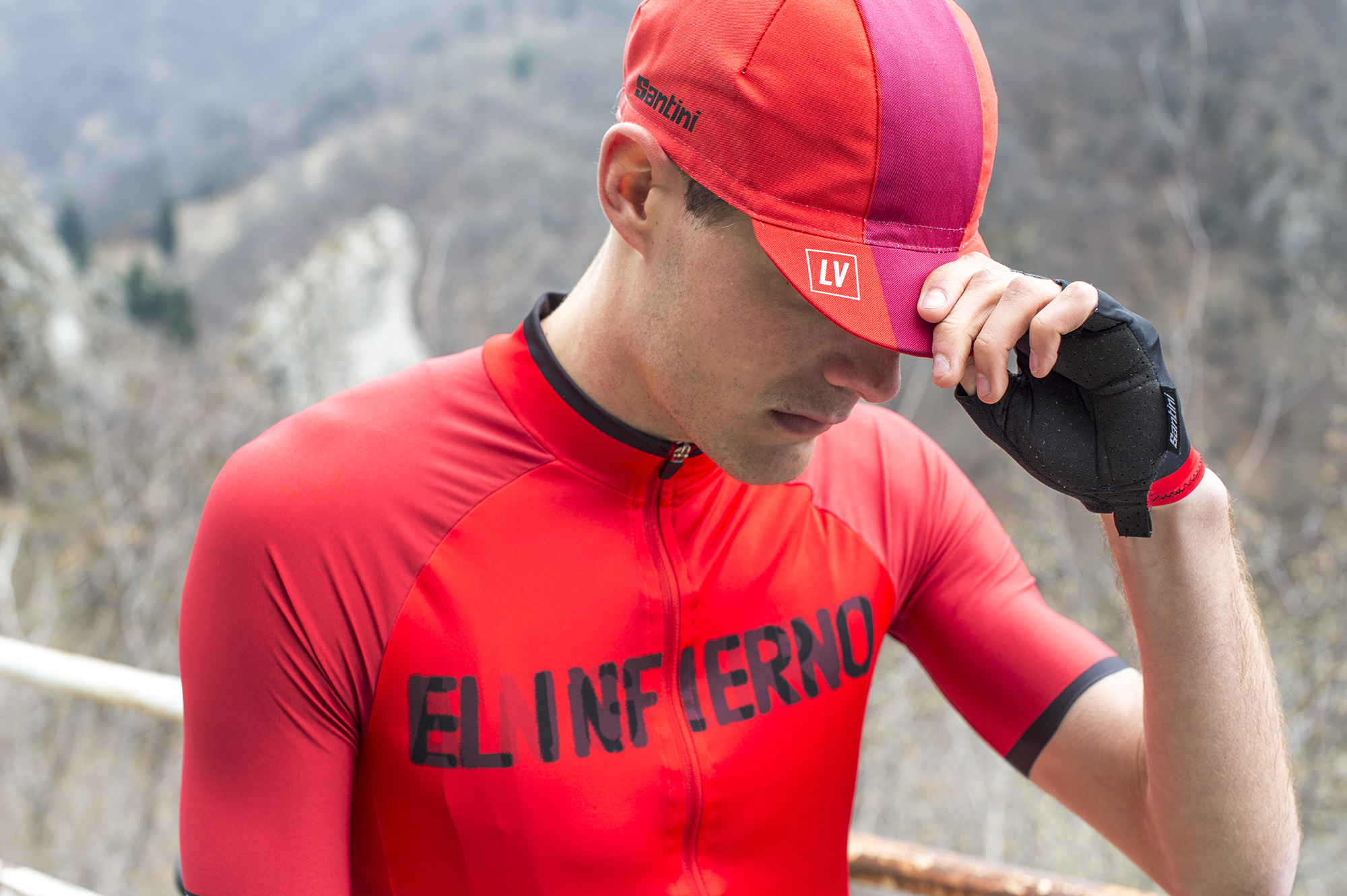 The Nimes Jersey – The Salida Oficiàl or Big Start of the 2017 Vuelta will take place in France, in the ancient city of Nîmes. Starting with a team time trial that will ride through the streets of the old city and right through the heart of its historical buildings, the riders will spend two more days in France. The crocodile, famous symbol of Nîmes brought to the city by its early Romans settlers to remember their conquest of Egypt is part of the jersey design. The Granada Jersey – The 15th stage Jersey is dedicated to Granada. We took inspiration for its design from the rich history of this monumental city, at the foot of the Sierra Nevada. The enchanting Hispanic-Moorish style of the Alhambra have been declined in the design of the jersey through the blue arabesque of the sleeves. 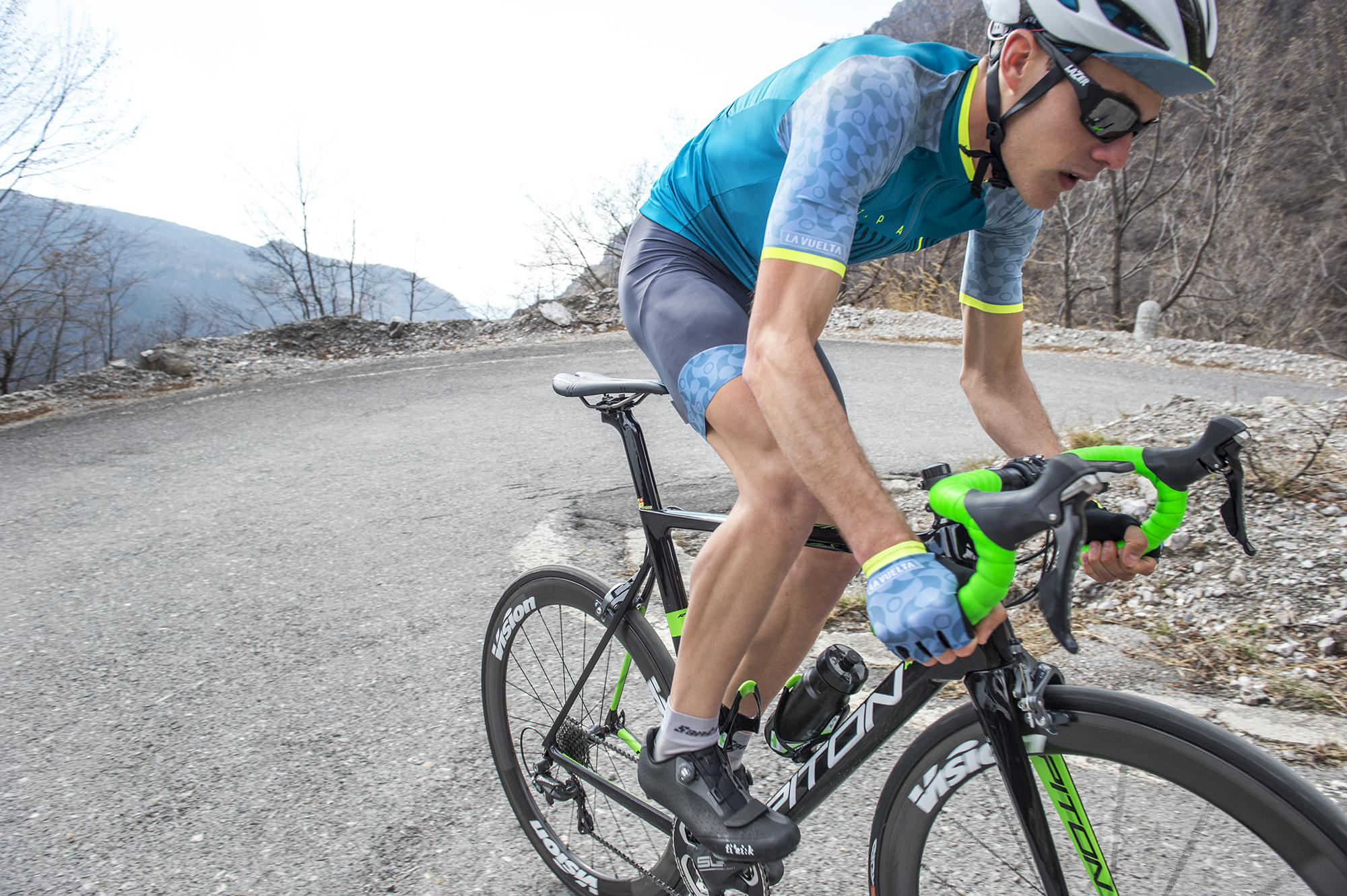 The Rioja Jersey – Santini celebrates the 16th stage of La Vuelta –  Logroño home of the famous Rioja’s vineyards with a kit that reproduce the colours and symbols of the Fiesta de la Vendimia Riojana, the Rioja Grape Harvest Festival. Let’s enjoy this 42 km of individual TT with a good glass of bright, berry-scented, barrel-aged Rioja red! 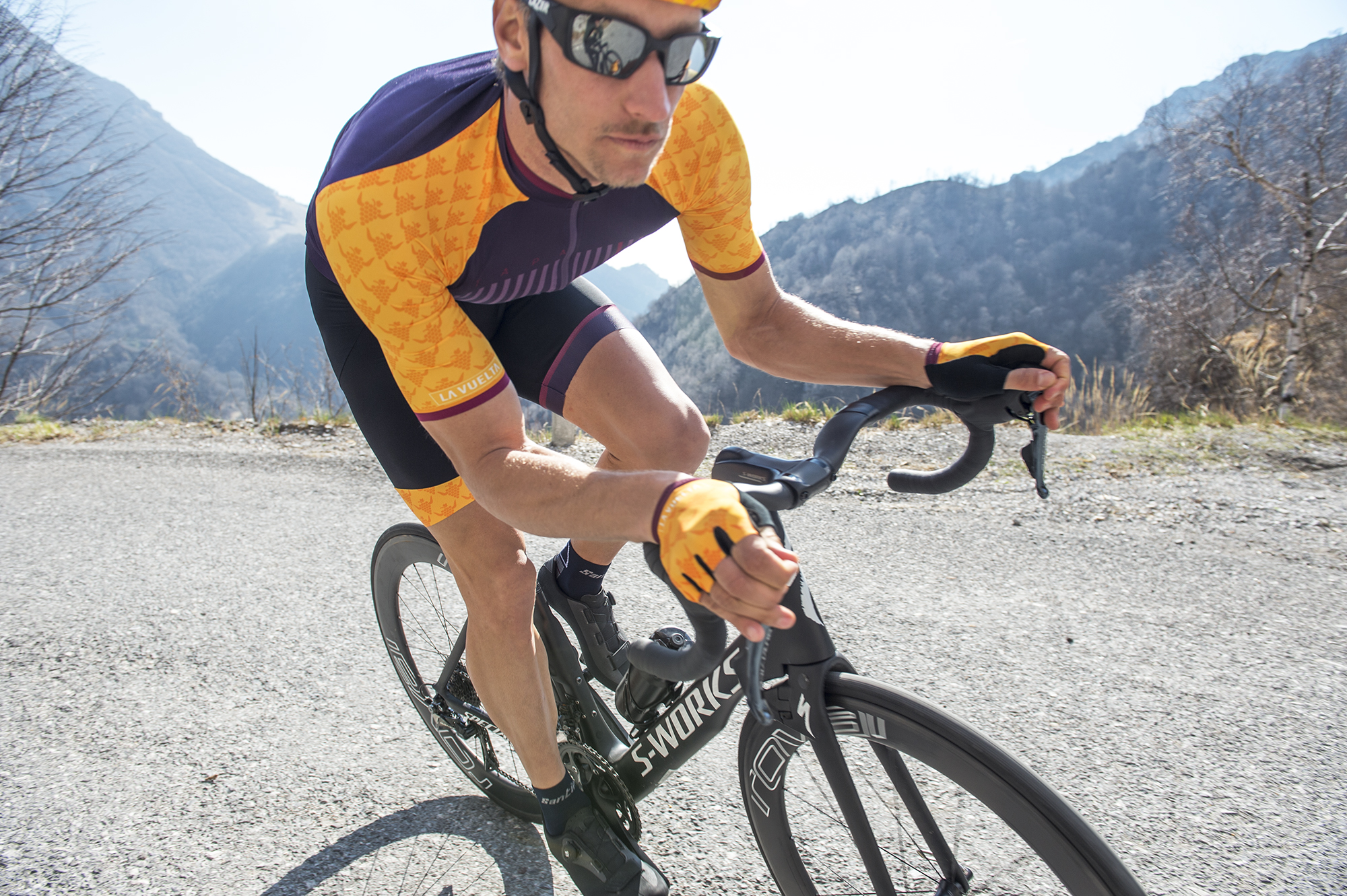 Asturias Jersey – Asturias contains the highest and arguably most spectacular mountains of all Spain. Stages 19 and 20 will surely show us some breathtaking battles with their climax on the Angliru. We drew inspiration for the Asturias kit from the well know Asturias flag with its bright blue and the golden “Cruz de la Victoria ” symbol of the Reconquista, re-conquest of the Iberian peninsula from the Moorish domination. 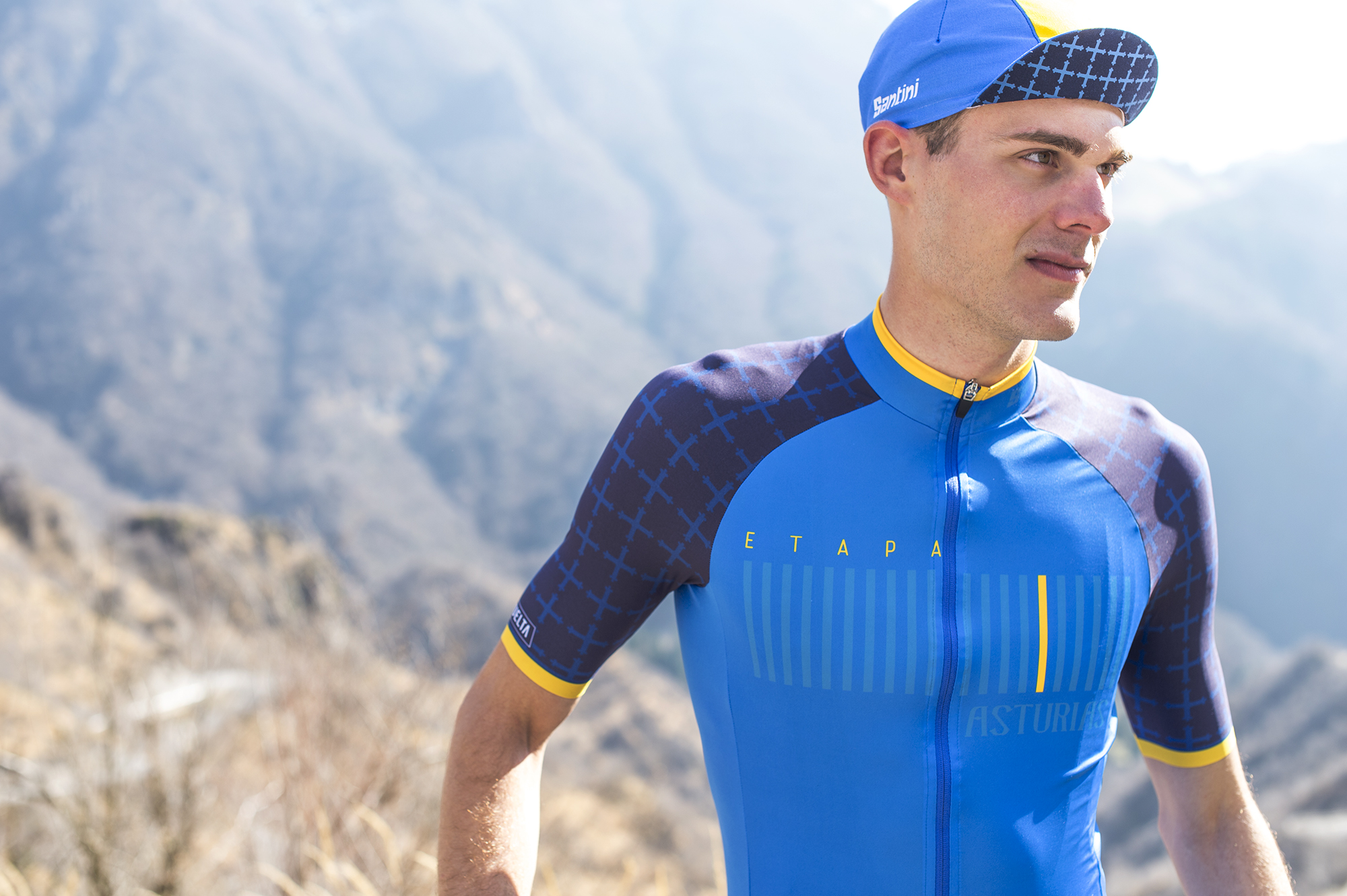 The Jerseys come as a complete outfit with matching shorts, cap, socks and gloves that look professional and stylish that look great, contouring the body in the right areas to create a flattering look whilst using the Kenobi lightweight ad breathable fabric developed and produced by Santini themselves for ultimate performance including Bodyfit raw cut sleeves with handy Triple back pockets.

9 Quick And Easy Steps To Clean Your Bike

Bicycle Highways On The Way.