As Esteban Chaves becomes the first Colombian to win Lombardia and the first non-European to do so in 110 years he takes the monumental win at the Lombardia. In the post-race press conference, he explains how he feels about one day classics, how he likes to celebrate and why he is known as the smiley one in the peloton! 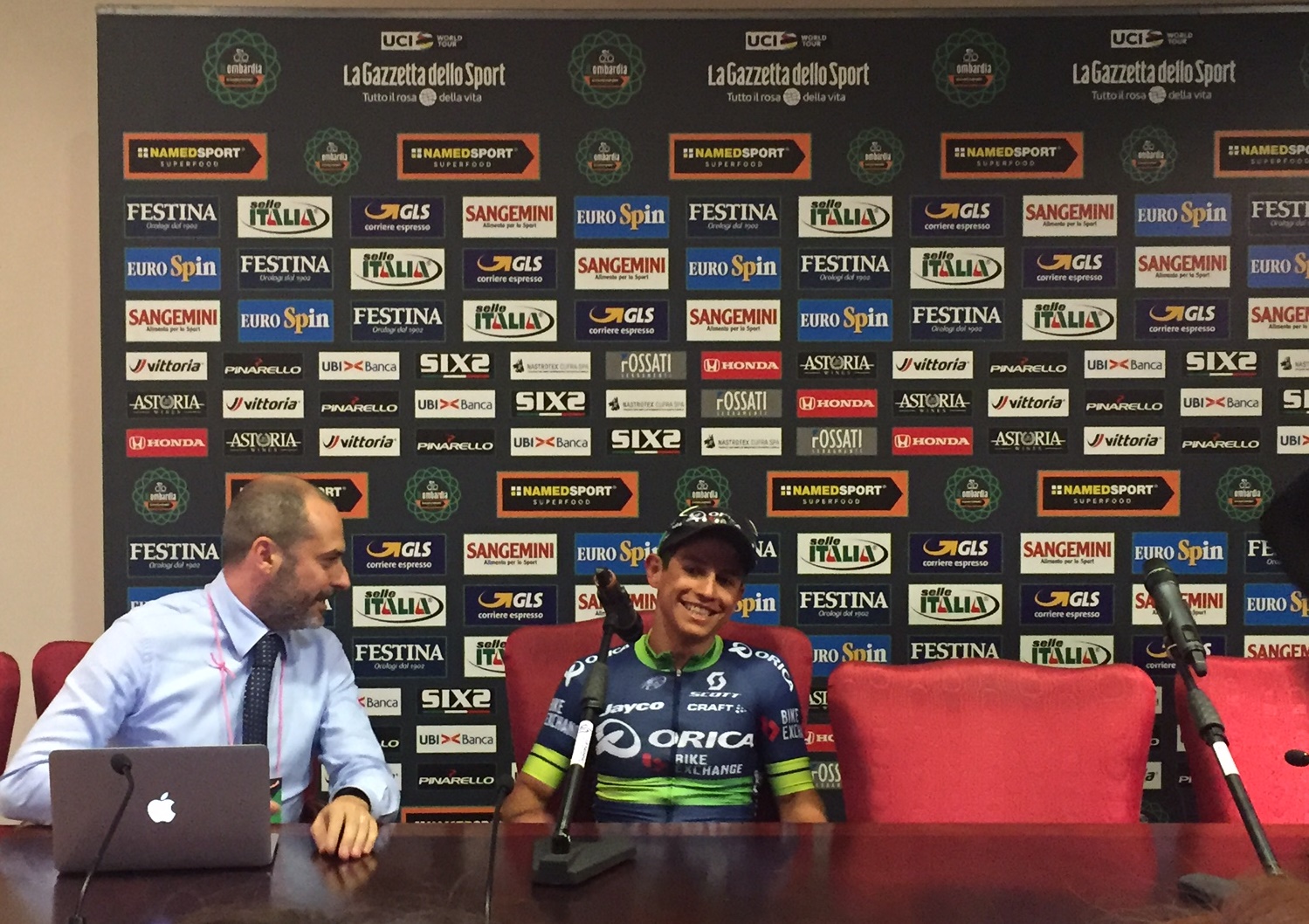 Esteban Chaves in the Press Room

Going into the race Chaves explained that he and the team had planned to win the race. They knew he had form after the Vuelta and planned for him to try and execute the win. Il Lombardia is one of the most gruelling races in the calendar and since turning professional he now lives near Bergamo, Italy and talks about how he knows the roads and had practised the Páve section a couple of times.

“The team had a plan to save the legs in the first few hours of the race and put the pressure on towards the end, which worked as a good tactic. The race started to split at the famous Madonna del Ghisallo climb (image of the monument) which eventually saw a four man breakaway go head to head and battle it out on the steep cobbled climb as they entered the city of Bergamo.

“The team preparation was super” he said, and had the form from the Vuelta. They worked closely with their sponsor Vittoria to test which tyres worked the best on the climbs and on the cobbled section in the finishing kilometres.

This is what the peloton are coming to in the final km's of the Giro di Lombardia, the cobbled climb! #iLombardia pic.twitter.com/2fCcmEt9Ox

Chaves said that in the last kilometres he was nervous that he may not win as none of the attacks stuck on the climb and knew it was going to go down to the sprint. De Rosa had been incredibly strong throughout so wondered if he would still have the legs at the finish line.

Now a winner of the 2016 Giro di Lombardia he can add this to his many palmares which he has to his name including a Giro d’Italia stage win and two Vuelta stage wins. Living in Bergamo he explains how this one is particularly special to him and is a “dream come true.”

The normal guy from Columbia has his feet very firmly on the ground and expresses that he loves the sport and intends to enjoy it. Competing at this level you have to remind yourself that it is only a sport and is something you have to enjoy first and foremost. This could be the reason why he is renowned for having a huge smile on his face!

Having won the Giro dell’Emilia and now the Giro di Lombardia, Chaves was asked if he would now be focusing on one day classics now. He strongly reinforced that:

“Stage races is what I am good at and what I love” and will not be turning his hand and focusing on one day classics. ‘The Lombardia is one of the hilliest and most demanding courses in the calendar and suits my climbing ability. We had the preparation right to win this race and where it fell in the calendar we were confident that we could execute a win on this occasion. We are not ruling out any more wins like this one” he smiled.

Now with a little break in the calendar, he added that he would be celebrating with his team mates with a beer and a pizza!

Catch up with our experience at the Giro di Lombardia over on our social media accounts!

When you're not cycling…

Snap shot of a city – Gap

How to pack a Scicon AeroTech Evolution 3.0 TSA bike case

Preparing For The Olympics